The Day the State Super Came to Town and I Wasn't Invited.

Alright, I'm 10 days into the new school year and I feel like I can safely say that I've been assigned to teach an incredibly pleasant and thoughtful group of sophomores. I can also say with some confidence that a great deal of my time has been spent, not on effective ways to reach students, but on excessive pre-tests, the teacher evaluation system, analysis of standardized test questions, the planning of remediation for standardized tests, and other such nonsense that has little to do with what's in the best interest of educating children.
Fortunately, Ohio's Superintendent of Instruction Paolo DeMaria visited the city where I live to participate in a workforce development summit yesterday, and was able to provide an explanation for my focus on standardization and assessment.
According to Elyria's Chronicle-Telegram he explained...
As we continue to watch the economy change, as we continue to watch our global competitors competing against us job for job and dollar for dollar, as we watch other states compete against us job for job and dollar for dollar, a decision was made to raise those standards. We need to raise them higher so more and more students are graduating from high school ready to succeed. We saw too many examples of students getting high school diplomas with hopes of enrolling in a place like Lorain County Community College and you know what — their academic skills just weren’t quite there.
He is right. We have watched our economy change as his colleague, Governor John Kasich drastically cut funding to municipalities eliminating thousands of jobs statewide. Kasich also cut funding to public schools which necessitated cuts of teachers and valuable programs which prepared students for the workplace. My school had a functioning television studio which drove student interest and increased their motivation. It was eliminated, along with some sports, art, instrumental music, and libraries.
DeMaria would be well served to look into some history at the ODE and perhaps some educational philosophy. First of all, students who participate in the arts, sports, and extracurricular programs have a greater likelihood of success. Eliminating them would seem to be counterproductive. Second, what we have implemented in the state of Ohio has little to do with a "decision to raise those standards," as noble as that sounds. What the state legislature and the ODE have implemented is an increasingly excessive and convoluted assessment system that first employed PARCC, now AIR, test questions from Nevada, Utah and elsewhere that they're using as a high stakes measure of students, teachers, and public schools, all while they obstruct similar measures at the charters they claim are effective.
With all due respect, Mr. DeMaria, we have used high stakes assessments for more than a decade and not closed the achievement gap. Furthermore, under the current administration and leadership in the ODE, Ohio has dropped in its national education ranking from 5th to 23rd. These policies are not working.
In another passage the Superintendent uses the introduction of the 3 point line in basketball as an analogy for our increase in standards in order to make students college and career ready...

That created an incentive for the system to recalibrate, coaches started coaching more players to say, ‘We value more this particular skill.’ It’s a great analogy for what’s happening in our economy, where people are saying, ‘We value these particular skills.’

The system stepped up, and you began to see many, many more opportunities and skills are developed to meet that challenge. That’s what’s happening in K-12 now. We’re not quite at it. We’re still used to making those 2-point shots, taking shots from the foul line. But more and more, we are up to helping our students become those 3-point shooters.

My first thought was, 3rd graders can't shoot three pointers, and the 3rd grade guarantee is unfair. Get rid of it.

Oddly, I see this analogy as an argument against the standardization he is celebrating. I'm not a basketball coach, but I'm willing to bet that they don't coach every player to shoot threes. It seems far more likely that, like a good teacher, coaches look at a player's specific skill set, interest, and potential and encourage them to develop certain parts of their game.

Our overuse of standardized testing does just the opposite, it forces us into very specific content area boxes, with a certain language and little room to move. When students score poorly and need to retake assessments for graduation, we provide remediation. More often than not this remediation is not developing academic skills, but test taking skills. That's a different matter entirely, but everybody has to shoot the damn three pointer in order to graduate.

Actual academic and workplace skills are typically soft skills that are difficult to assess using a standardized measure. None of this is nearly as simple as that. Creativity, teamwork, motivation, resilience, skepticism, problem solving are often the skills best developed by the programs we are eliminating, not standardization.

At the article's conclusion, DeMaria finished with a comment on the coming school report cards...

Anytime you make changes that reflect higher expectations, it sort of sets a recalibration of the overall measures. I think it also reflects that we know we have to continue to make changes to the system. There are a lot of tools in the toolbox to gauge the value of an education, the value of a school district in the community. This is just one piece of it. I think it does shed some light on where things are in terms of the main academic categories and the way different student populations are being treated.

While I don't think continual changes are a great idea, as evidenced by the state's mess of an assessment system, I do agree with a piece of this statement. There are a lot of tools to gauge the value of an education. So why do we continue to place so much weight on a score on a standardized test? 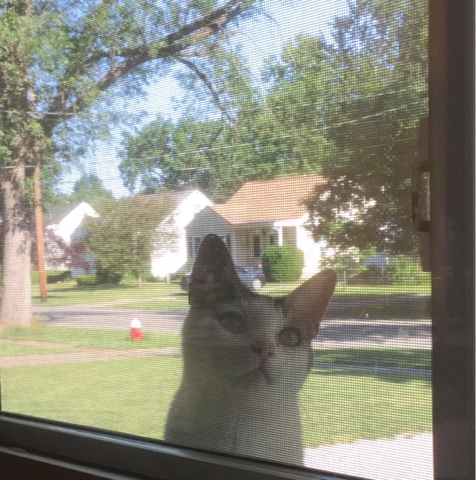 That's T-bone. Now, this may sound like I've lost my mind, but I think he knows that I go back to school next week. I know what you're thinking, "Did you tell him?"

No, I did not. I'd been waiting for the right moment to break the news, but as I said, I think he knows. T-bone has been trying to make the most of our last few days of summer, spending more time inside, sitting on my lap with his eyes lidded like the Buddha, spending more time sitting on my lap before he invariably becomes agitated and claws the hell out of my arm (distinctly not Buddha-like). He has also more frequently insisted that we sit together on the backyard grass for long conversations before he invariably becomes agitated and, well, you know.

Whether T-bone is as intelligent (or sociopathic) as I suspect or I've simply spent too much time with my cat this summer matters little. School starts next week and I'm getting excited. In the absurdity of my excitement, I thought I'd make some bold (and some not so bold) predictions...

#1) Scores on this year's report card for nearly all schools will be far poorer than prior years because of a second year of new assessments. The ODE will admit as much, and discuss the time and effort that are being put forth to improve student achievement (read scores), as well as the importance of accountability. The ODE will release new information on the assessments which will be impossible to find on their website.

#2) Furthermore, the ODE will persist with the propaganda that standardized tests are necessary to assure that our children are college and career ready (without any mention of the limitations in the use of standardized tests for this purpose), and schools unable to meet arbitrarily set achievement levels should be taken over by the state and/or opened to private corporate management firms, what they will call public charter schools.

#3) Predictably, those schools and districts with the lowest scores will be those who serve our society's most vulnerable populations as the assessments prove once again that they are best at measuring economic standing.

#4) In response to implicit and explicit threats from the ODE, school districts will purchase more hardware, software, and educational materials, while students get more "screen time" in school in the interest of improved scores. Everyone will swear that this is NOT "test prep," but rather a means to assure that your child is able to compete in a global economy. We all know it's test prep.

#5) New State Superintendent of Schools Paolo DeMaria will continue to insist that he welcomes the feedback of all stakeholders in education, from parents to principals, from teachers to students. As emails and the responses to surveys pile up, no results from the feedback will be made public, nor is any response evident from the Superintendent himself aside from his ongoing support of charter schools.

#6) ECOT will continue to ignore its detractors who point to its 30 something percent graduation rate by arguing that it has the largest graduating class. Their ability to ignore facts, fail to grasp simple statistics, and completely miss the point for the sake of profit will make even those who accept the largest campaign donations from William Lager begin to flinch a bit. But not Dave Yost, our brilliant state auditor who already rewarded ECOT's excellent record-keeping. He'll continue to deflect the blame as he keeps one eye on the governor's office.

#7) Based upon the alarming percentage of high school students, likely 30 - 50% in some districts, who are not on pace to gain their 18 points to graduate, a larger collective outcry of students, parents, teachers, and other stakeholders will be heard demanding a remedy to this untenable situation. The overarching goal will become completely disconnecting high school graduation from standardized test scores. In response, the ODE will once again explain the completely inadequate 3 paths to graduation.

#8) Meanwhile, in districts around the state, teachers like myself will do our best to set all of the above bullshit aside, in order to have some fun, keep it weird, and teach some kids. And when they respond well and find success we'll champion their accomplishments. And when they have some difficulty, or everything seems overwhelming, we'll try to find some pragmatic solutions. After all, we didn't get into this business for profit or power, or in the interest of furthering a political agenda.

Hey, T-bone, I'm going back to school next week.

Posted by Matt Jablonski at 4:16 PM No comments: