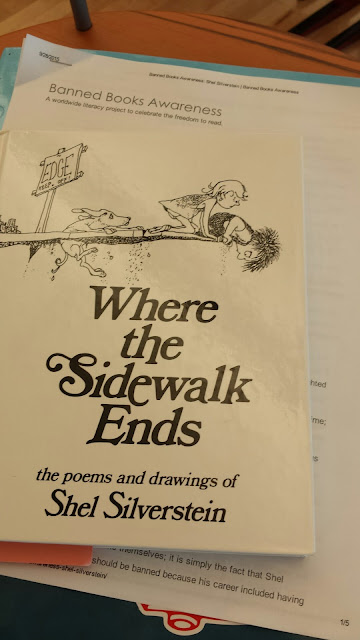 At the risk of promoting "anti-authoritarianism" and "rebellion against parents" I read some excerpts from Where the Sidewalk Ends to my 10th grade American History students today in honor of the beginning of Banned Books Week.
A few more of my favorite frequently challenged or banned books...
Brave New World
A Light In the Attic
Slaughterhouse Five
Of Mice and Men
The Perks of Being a Wallflower
Fahrenheit 451
The Grapes of Wrath
The Bluest Eye
To Kill a Mockingbird
The Absolutely True Diary of a Part-Time Indian
Howl and Other Poems
Posted by Matt Jablonski at 6:18 PM No comments:

Testing times too long? What do I know?

Well, here they are. Testing times grade to grade in Ohio.
Less? In most cases.
Still problematic? Definitely. We have only to look to the increase in testing for 3rd graders because someone in the Ohio Department of Education believes that 3 hours of testing for an 8 year old is appropriate. At least they're allowed to split it into two 1.5 hour sessions.
Hey Legislators. Find an 8 year old. Make him sit still for an hour and a half.
In my personal experience, it has been difficult to get some 15 year olds to maintain focus on graduation tests for that length of time.
Then again, what do I know? I'm just a teacher, not a legislator. 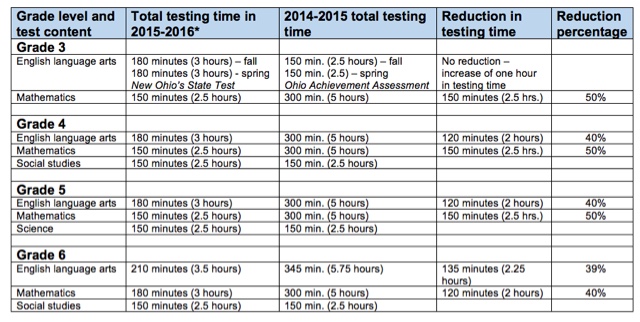 Posted by Matt Jablonski at 8:34 PM No comments:

The Day I Looked Like a Maniac at a Panel Discussion on Meaningful Assessment. 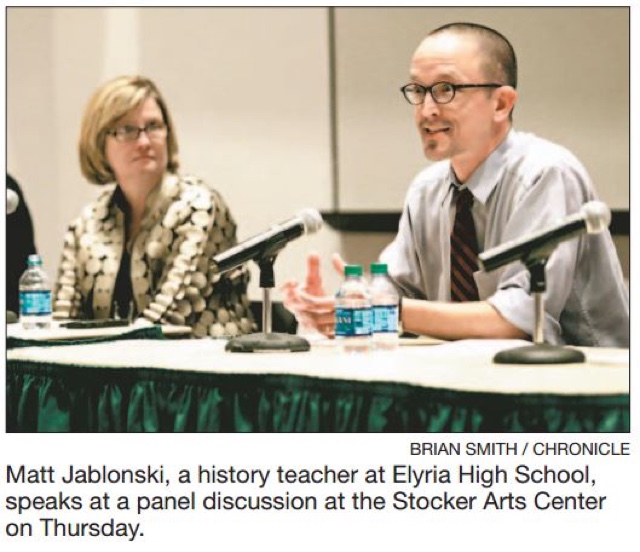 I'd like to thank our Superintendent, Tom Jama, for inviting me to participate in a panel discussion on the film, "Most Likely to Succeed." My initial outrage regarding a film that highlights a charter school funded by a millionaire philanthropist and is not held to any curricular standards or high stakes tests gave way to the realization that we are facilitating meaningful instruction and creative assessment in Elyria (and many other public systems) as well.

The idea in its essence is something that most educators know, that students learn through making meaningful connections between new content and their existing knowledge. Furthermore, if they are given the opportunity to make decisions within and about their learning process, then it becomes more meaningful. Project based learning can facilitate these ideas when it can be introduced to students.

I mentioned my son's elementary school teacher Ms. Amos, who is one of the best educators I've had the pleasure to meet. She engaged students where they were, facilitated group conversations, learned about their interests and background, and wasn't afraid to diverge from the content to pursue meaningful instruction and assessment based on student interest.

Built into all of these experiences is a reflective process. Students are encouraged to consider their role in their education, to reflect upon their performance or process, and how to move forward. If truly internalized by students, this becomes habit and can serve them in future educational settings and elsewhere in everyday life. Essentially the individual comes to understand their own strengths and shortcomings becoming self-aware and able to adapt, learn, and succeed in a variety of situations.

Our content is king in our world of standardized tests, but what is best about the above tactics is that they help to convey the hidden curriculum or soft skills like empathy, compassion, teamwork, compromise, skepticism, confidence, and perhaps a hint of anti-authoritarianism to name a few.

Of course, our ability as educators to facilitate experiences rich with meaning is limited by the political environment. The overuse and over reliance on standardized tests minimizes quality instruction time. Linking said tests to high stakes scenarios like retention and promotion, as well as teacher evaluation further complicates the situation. If we want a meaningful shift in instruction and assessment in our classrooms, we would be well served to remedy these terribly problematic political issues.

While seated on this panel with two superintendents, and a provost from the local college, moderated by another superintendent, I looked around and got a sinking feeling that I was out of my element like Donny in The Big Lebowski. I like to think that I held my own. If not, then I certainly looked like a raving maniac while trying.

Posted by Matt Jablonski at 12:08 PM No comments:

The Revision of Our State Assessment of Poverty.

The state of Ohio has continued to release more information regarding this year's revised standardized tests. Each communication arrives in my in-box and I become sick with excitement. I am the proverbial kid on Christmas Day, running from room to room in order to share the news with my colleagues.

"Look, look! The tests will be given over 10 to 15 days instead of four months!"

"Did you hear? Students may have an option of taking an assessment in two, hour and a half sessions, or all at once for three hours!"

"Gee, the state really listened to our concerns."

And so on, and so forth. I've tried to move into this process with optimism, but what I keep coming back to is the futility of the process.

Ohio is now admitting that the tests provide no data to inform instruction, but rather are being used to rate schools so that parents can be informed, and rate teachers to pinpoint the ineffective. The problem is that standardized tests were not designed for these purposes, and do nothing to accurately portray how much has been learned.

Furthermore, if the goal is to help struggling schools or to narrow the achievement gap, as was laid out to start this process, then a dozen years of assessments have failed to accomplish that goal.

The schools that tend to score poorly are those whose populations have high rates of poverty. So, instead of providing social, academic, medical, or mental health services that might remediate the economic issues and actually create an environment more conducive to learning, we're going to double down on assessments, blame teachers, label impoverished schools as failures, then privatize.

Not long ago I spoke to a former teacher who said that she didn't believe that poverty was something that can impact academic success. My first thought was that she has never truly been hungry, experienced unemployment, transient or inadequate housing, a lack of heat or medical care...any of the above and tried to learn.

I would have assumed she'd at least have remembered Maslow's Hierarchy of Needs. 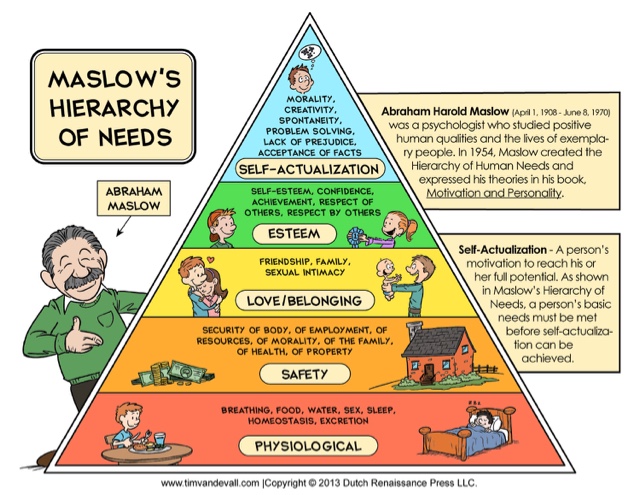 That aside, perhaps the school rankings based on state assessments might have been made available, and with a rudimentary knowledge of wealthy vs not wealthy communities a person could see a fairly clear correlation between income levels and test scores.

Don't get me wrong, I believe that students from a low socioeconomic background can learn, and be successful in school. Students from low income families are now in the majority in U.S. public schools. I am a public school teacher in an urban district. I would be a walking contradiction if I believed otherwise.

However, the success of the low income student comes with an extraordinary effort that often involves not only the public schools, but a combined effort of public and private nonprofit agencies providing remediation services to satisfy the primary needs of the student. Only with a freedom from hunger, an assurance of housing, security, and a sense of stability can a student move forward with any sort of focus on academics.

No, I do not think that poverty prohibits learning, but I believe it is terribly foolish to think that it is a non-issue. Our policy makers would be well served to consider this argument.

Yeah, the tests are shorter this time around. Last year's Ohio assessments were like getting punched in the throat. Twice. This year we're only getting punched in the throat once. And guess what, they will still only measure your child's economic status, with little variation, and they will do absolutely nothing to better the education of Ohio's kids, rich or poor. Millions of dollars will be spent on our revised testing system, that could be used in far more effective ways.
Posted by Matt Jablonski at 8:23 PM No comments: