The Ohio School Board will be weighing in on the issue of the graduation requirement at their meeting on November 14 and 15. I have contacted them to indicate my position and concern over what could be a sharp decline in graduation rates next year. I have made my thoughts quite clear on this matter over dozens of posts on this blog in the past. My message to the school board can be found at the bottom of this post.

Now we need you to make contact with the school board. Many legislators indicated that when the testing system last changed it was due to the sheer volume of correspondence they had received from educators, parents, students, and other stakeholders. You are welcome to use any information that I have provided. However, I would encourage you to tell them your story. If your letter sounds nothing like mine, so much the better. I have somehow become an old teacher and my letters sound like it.

If you are an educator, then tell the story of how this is impacting students in your school. What problems have you faced in teaching toward, and administering these assessments. How have the tests impacted the learning process? How did your students score? How do they feel about the situation? What challenges will you face? If you have ideas on how to fix the situation, let them know.

If you are a parent, describe your children. What concerns do you/they have? How has testing impacted their education? If your kids are in high school, are they on pace to graduate? What about their friends? How will this situation impact their plans for the future? If you have ideas on how to fix the situation, let them know.

If you are a student, explain how testing is impacting your education. How are your scores? Are you in tutoring to retake assessments? What's that like? How do you and your friends feel about this situation? Will this system effect your future plans? Again, if you've got ideas on a fix, let them know.

Whoever you are, if you are concerned about this, find your angle and write the members of the Ohio Board of Education. Save your email. We'll contact our legislators after the November election. Below is the contact information for all board members and the state superintendent. For a cleaner image click here.

Board Member So and So, and Members of the State School Board,

I was pleased to learn that the Board is studying the terribly problematic issue of high school graduation as it relates to this year's junior class and beyond. As an American History teacher at Elyria High School, I have been concerned about this issue since the results of the 2015 tests were released. This year's scores proved there was no anomaly. As you are aware, some influential stakeholders are estimating that up to 40% of juniors statewide will not graduate next year under the current system.

Prior to any discussion of this, it is important to recognize that these assessments are entirely unnecessary, both legally and philosophically. High stakes standardized tests have not closed any gaps nor improved education since their inception. There is absolutely no federal requirement, under ESSA or otherwise, for graduation to be dependent upon passing a test. Ohio is one of only 14 states to require this, down from 25 states just 10 years ago. Current high school students deserve a "safe harbor" through at least the class of 2020, so that state tests have no bearing on their graduation. I would then encourage that we make this Ohio's permanent policy as we move toward federal minimums in assessments, in line with federal law.

As for the 40% not set to graduate, I would argue that this number is accurate in that urban high schools like Elyria will graduate that amount, while the big urban districts could have grad rates far lower. This is occurring because the 3 Paths to Graduation are a myth. The ACT/SAT route is out of reach for most students. According to the Ohio Education Policy Institute, only 15.1% of students scored remediation free on the ACT in district with 90% or more economically disadvantaged students. The number is 69% for affluent districts with less than 10% economically disadvantaged. The industry credential route also covers very few students. According to the Ohio Report Cards, the Lorain County JVS, which serves Elyria students, only had 8.9% of its students receive the credential.

What students are left with is a scramble through a prohibitive assessment system toward the 18 points necessary for graduation. At Elyria High, students who should be graduating will not graduate. We have set up a system to provide remediation. I am teaching the American History course. However, far more students need assistance than there are spots available, and remediation is little more than targeted test prep. If the purpose of the assessments is to assure that students are college and career ready, as the ODE has so often stated, the system itself only takes time and resources away from programs that might promote this readiness. Advocates believed that this testing system would allow students to supplement low scores with high scores in areas of strength. While this happens, what happens far more often is low scores in multiple areas and a subsequent inability to accrue enough points toward graduation.

What we face is an educational catastrophe brought on by an assessment system in perpetual flux tied to the high stakes matter of graduation. If nothing changes, Ohio will face an economic crisis as well. The Bureau of Labor Statistics reports that high school graduates earn a median weekly income of $678, while non-graduates earn $493. If the current graduation requirements remain, we will have reinforced the cycle of poverty and thrust countless Ohioans onto public assistance.

It is imperative that the State School Board and the Ohio Legislature act to institute the aforementioned "safe harbor" through the class of 2020, and an elimination of high stakes decisions tied to assessments, like graduation, as allowed by federal law.

Thank you for your time and consideration.
Matthew T. Jablonski
Posted by Matt Jablonski at 5:52 PM No comments: 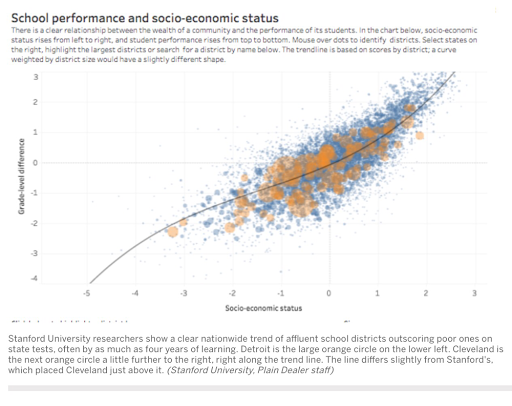 Number One: In a recently released longitudinal study researchers at Stanford University have quantified the degree to which affluent students score higher than economically disadvantaged students on standardized tests.

Number Two: Hamilton City Schools Superintendent Tony Orr has indicated that as many 40% of this year's Juniors will not graduate next year based on Ohio's new testing system.

A Conclusion: Unless the Ohio Department of Education and the state legislature start paying attention and fix the current testing system as it relates to graduation, we will be failing to graduate a ridiculous number of students, many of them simply for being poor.

“If our ultimate goal is the right one — to get students to a higher level — why should we be happy that they’ve already reached (graduation level on the OGT) by sophomore year?” DeMaria said, adding that students may need more time to master some concepts.

Another Conclusion: It is time for the Superintendent to begin actually listening to some of the input he's been asking for, and respond with something more than the rhetoric and talking points he's been fed by the ODE. In this case, the Journal-News seems to have taken an old quote from DeMaria, so I'll give him the benefit of the doubt. However, it is time for a legitimate response to these concerns.

Graduation (and other) standardized assessments are essentially meaningless except as a measure of economics. How do you respond to this reality, Mr. DeMaria?

I had the opportunity to meet the Superintendent at the recent ESSA stakeholder meeting in Elyria. We talked about the start of the school year, and I thanked him for the opportunity to provide input on Ohio's educational direction. I told him that I looked forward to building something excellent in education in Ohio.

I'm thinking that he should also be made aware of a few things I think he and the ODE are trying to ignore as we adapt our state system to the new federal legislation...

Number One: We test far more than the federal requirements. Other states are moving to the minimums. Stakeholders in Ohio agree. Listen to them. Decrease the time spent on testing.

Number Two: Federal Law does not require high stakes outcomes be tied to standardized tests. Get rid of the 3rd grade guarantee. Get rid of the graduation or End of Course tests (only 14 states do this). Disconnect test scores from teacher evaluation. This will decrease the time spent on test prep and remediation which only exists for the sake of passing a test.

Number Three: Stop pretending that these assessments measure mastery of something, or career and college readiness, or some other bullshit about rigor or high expectations. The data is meaningless. The scores are a measure of economics. If you want to see how schools would perform on assessments look at recent data on median income, unemployment, students on free and reduced lunch...

I feel like I've written this same damn blog post dozens of times. I'm so tired of looking at kids in my building and seeing test scores in their worried faces. Put us out of our misery.


Posted by Matt Jablonski at 11:04 AM No comments: