In Conversation with our Legislators.

My wife and I had the pleasure of sitting down with our legislators after school on Friday in conversation on education. Senator Gayle Manning, Representative Nathan Manning, my wife and I had a lovely visit in the historic Washington Building at Elyria High School. We discussed many things, mostly education related, though my wife reminded me that at one point I seemed to suggest that my grandmother was capable of more yard work than I am when she was 100 years old. I will neither support nor refute that claim, except to admit that she is the hard working daughter of Polish immigrants, as well as a 1931 graduate of Elyria High.
I would love to say that we discussed all of Ohio's issues with public education, even better that we developed solutions. Simply based upon the scope of educational issues in our state, this is impossible. However, I believe that we found a lot of common ground and that the Mannings are supporters of public education. As we know, agreement in one place doesn't necessarily lead to legislative action or success in another. Democracy is a beautiful, but complex and often cumbersome process. Because of this I'll remain realistic regarding possible reform of the current system.
Anyway, as always, I believe that it is important to let our elected officials at all levels know how we might move forward and improve our communities, educational and otherwise. In the interest of promoting dialogue between educators and legislators, I have sent the following email to all of the teachers and administrators in my school.  Check it out...

After our Professional Development on Friday, I had the opportunity to welcome Senator Gayle Manning and Representative Nathan Manning to Elyria High School in order to meet with my wife and I for a discussion of education. We had initially scheduled this meeting to discuss the Youngstown Amendment to HB 70 which takes effect October 15, and seems to be a piece of the end game of turning discredited public schools into charters through the appointment of a CEO. While this doesn't present us with immediate concern here in Elyria, Lorain would be the next district after Youngstown slated for take-over.

Senator Manning indicated that she and others were working on a legislative solution that would seemingly set Youngstown up as a pilot program to be studied. Unfortunately, this does little for Youngstown, but would seem to create a situation that buys Lorain more time. My wife and I indicated that we were aware that Senator Joe Schiavoni is also crafting legislation as a remedy, and Senator Manning indicated that she would initiate contact with her fellow Senator. For what it's worth, there are also a few lawsuits, and a request for an injunction to prevent the introduction of the plan.

We also spent some time discussing HB2, the bill that would begin to regulate the state's charter schools. The bill has passed the Senate and stalled in the House just before their recess. Both the Mannings are supportive of the current bill, but indicated that it would likely undergo further changes in the House before another vote. We indicated our overall support for the bill as "a beginning" in the overall regulation of Ohio's charters.

I would have been remiss had I not mentioned standardized testing. I reiterated my thanks for eliminating PARCC, while indicating that AIR has had its own issues with misleading and ambiguous questions. I thanked them for the move to a single testing window, while assuring them that we still assess far too much in Ohio K-12, that the 3rd grade guarantee is atrocious, our testing of Special Education students abominable, and the use of the VAM or any standardized testing in the evaluation of teachers was essentially meaningless.

By and large, the Mannings were receptive to our input. They were also very complimentary about what we do here in Elyria. I got the idea that they see us as an example of how public education can work in urban areas with diverse populations. We have done what is right for our students, and done well to promote our achievements. Be proud of your efforts.

Also, do not discount the power of your own voice. When a bill comes around regarding the Youngstown Amendment, or HB2 comes to a vote in the House, let your (and all) legislators know how you feel.

Thanks to Mr. Brown for letting us meet here at E-High. It gave me an opportunity to talk up our facility, programs, and students. If anyone has any questions about the meeting or otherwise, please let me know.

When I moved into my classroom on the third floor of the Washington Building a few years ago, a praying mantis watched me from outside on the window ledge. I saw it as a sign of good things to come.

Entering the building this morning, a praying mantis was waiting for me on the door, another auspicious beginning. 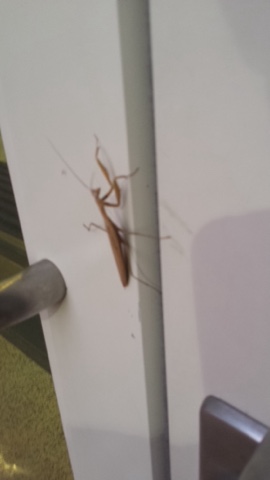 Posted by Matt Jablonski at 6:56 AM No comments: 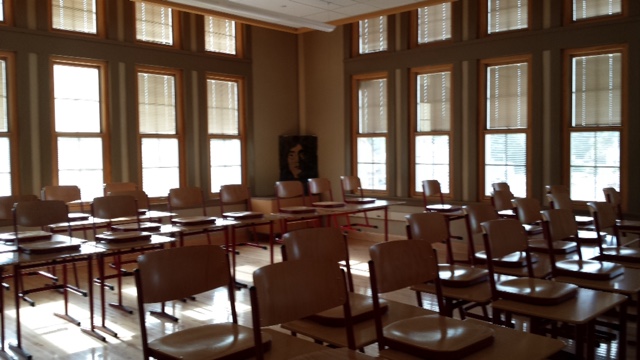 It was a fairly short summer. Many districts have adjusted their calendars to afford, among other things, more time for instruction prior to standardized testing. It's a good thing, especially since we won't have a map of the new tests or sample questions until later in the fall. The degree to which this is problematic will vary from grade to grade and subject to subject, but it will be problematic, problematic for all of the reasons it has been in the past (too lengthy, cultural bias, no timely feedback, etcetera, etcetera), and problematic in new and exciting ways as well.
My apologies for using the word problematic four times in that run-on sentence. Have I illustrated that I believe there are problems with standardized tests? Good. I'm sure I'll have more on that as this school year progresses.
So, I went into my classroom this week to get some things ready. My first week and a half are planned, materials set. I had a look at class lists, and everything seems in order, five classes 26-28 kids each, sold out shows. I've been assigned a few hundred new friends on lists for cafeteria duty. I've put in some prep time this summer to adjust methods and materials. I'm ready to go.
I stood in the doorway of my classroom (see picture above), and all successes seemed possible. The thing is...every year I wonder whether I can do this again. Usually, I'm concerned that I won't remember how to teach, to interact, to build relationships, to put on the necessary show to hold the attention of 28 fifteen year olds at a time, and assure that they achieve the necessary level of mastery in American History according to Ohio's standards in relation to their own individual background knowledge, learning styles, strengths and weaknesses.
But now the issues have multiplied, with so many adults, in education, government and the community weighing in, and taking away, as well as adding to and coming down on what we do.
I ran into a few former students while I was in the building. They've become mentors to incoming freshmen, sharing information and support in a brilliant program designed to build connections. These kids are so enthusiastic, so terribly motivated, it is almost impossible not to be inspired to work for their benefit. Sure, they're not necessarily cheering on the end of summer, but they're ready to go.
As always, the students have made all the difference.
It was a fairly short summer, but we're ready to go.
Posted by Matt Jablonski at 9:30 AM No comments:

Remarks for the School Board