State Assessment Scores, and then what really matters.

Well it's Memorial Day and the school year is near its end. I know, I can hardly believe it myself based on the simple fact that we're done 2 days into June instead of a week or more later. This new calendar is designed to provide us, educators and students, with more time before the state assessments.

It's worth reflecting on the overall effectiveness of this decision-making.

I'm sure those folks who spent the dog days of August in classrooms without climate control would have a few words. My son and his friends spent a few days under these conditions, returning home soaked in sweat with the vacant look in their eyes that comes with dehydration and exhaustion. My wife and I would ask how was school, what did you do? "I don't know," was the typical August reply and I believed him. His brain had just spent 6 hours cooking inside his skull, and not because of Ohio's rigorous New Learning Standards.

Some teachers took those extra few weeks early in the year just waiting for the opportunity to administer their district scheduled Student Growth Measures, pre-tests necessary for compliance with the Ohio Teacher Evaluation System. I love it when waiting on permission to administer one assessment prevents the beginning of preparation for another assessment. So much for the state's assertion that the elimination of PARCC has cured what ails us.

To be honest, the only evaluation of the adjusted school calendar that anyone is going to care about, regardless of the thoughtful or sweaty analysis of teachers and students, are the scores on the state tests.

If you keep up with the Ohio Department of Education, those scores have been released. Not your child's scores; let's not be silly. What the ODE has already determined is how many students will score proficient or above. Based on the scores of students in Washington, or some other state with comparable NAEP scores, the state has analyzed and determined cut scores. So, for example, on this year's Algebra I test the ODE predicts 57% of students will score proficient or above. For English I the number is 54%.

Here's a link to the information for all grades proficient and above percentages for Math and ELA.

So, how well did my students do on the assessments? Well, I don't know, but the state has this predetermined percentage that would indicate, predictably, that students in an urban district like mine will score poorly. Consider the flip side of those percentages. Yes, 54% in the state will score proficient or above in ELA I. That means that 46% will not earn enough points to meet the average in order to graduate. As I've said before, I believe this is terribly problematic, but no one seems to want to talk about it. As a teacher, could I begin a course with the assumption that 54% will pass? No. Yet this seems to summarize the methodology of the Ohio Department of Education and its assessment system.

Again, how well did my students do on the assessments? I don't know. To make matters worse, we are not permitted to see the tests, discuss the tests, reflect on the tests, and we'll not get any scores from the tests until months after my students leave my classroom. Furthermore, the ODE has suggested that they will be providing schools with little to no data regarding performance levels on individual or bands of standards which will make it nearly impossible for educators to target areas of concern.

Did the extra time before the assessments help? Who knows, but more time for meaningful and relevant instruction is always beneficial. A simple way to maximize the aforementioned instruction time is, quite simply, to minimize assessment time. If we could do that, I wouldn't have to keep talking about this shit.

Believe me, I'm tired of talking about these things. As I said, it's the end of the school year. We're all tired. At some point this year, I made a conscious decision to try and simplify my approach. Fear not, I covered the content and did my due diligence grinding through test preparation. My student's graduation is dependent upon that reality. But that's a stressful proposition, so I tried to focus more on being a decent human being while bringing humor and understanding to an otherwise atrocious situation considering the high stakes testing. I wanted to recognize that the life of a student can be difficult, and that I was in a position, perhaps, to improve the quality and nature of their educational experience.

So, to my students this year...Hannah, Sebastian, James, and Brandon. The many Emily's, Mikayla, Mackenzie, and Michael. All of you that I had the good fortune to meet. I hope that it worked.
Posted by Matt Jablonski at 10:11 AM No comments:

Still Life With Howard Zinn and The White Album. 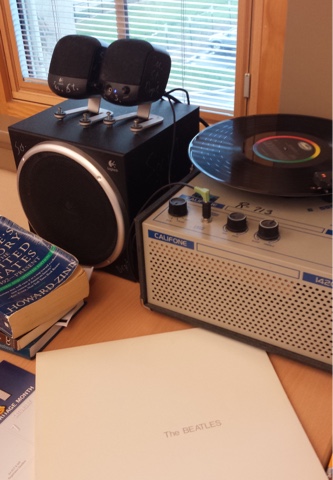 Having referenced a quote from former Secretary of Defense Robert McNamara regarding the Gulf of Tonkin Incident in Zinn's People's History in class on Wednesday, held a mock student draft using the 1969 lottery numbers yesterday, and opened class today with While My Guitar Gently Weeps, my students and I continue to enjoy meaningful and relevant academic experiences.
This is the beautiful time of year that I commonly refer to as "Life After Assessments."
Don't get me wrong, there's a test on the war in Vietnam a week from Tuesday, but it speaks directly to my student's experience, is administered within the context of our study of the topic, contains no questions seemingly designed to be purposefully obtuse, and comes with guaranteed thoughtful feedback from the instructor (that's me) by Thursday.
Posted by Matt Jablonski at 8:01 PM No comments: 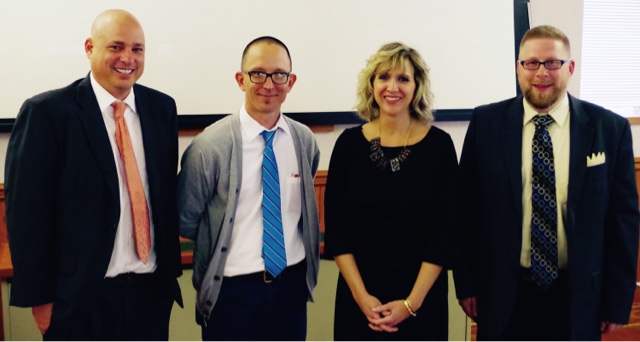 On Thursday, I had the wonderful opportunity to visit Kent State to address a group of aspiring teachers and a few of their professors regarding the work my wife and I have been engaged in to positively impact education policy in Ohio.

I often find the activism disheartening as an issue I'm addressing becomes compounded by others, or as correspondence to legislators goes unanswered, or if those with whom I meet and speak seem uninterested.

However, in planning my remarks I was able to set side by side the accomplishments of the past 2 years and I was encouraged. I know, excessive assessments persist, funding is not yet equitable, Ross and Hansen have not been investigated, and the Youngstown Plan moves forward. Within that mess, the double testing window is gone and so are Hansen and Ross, a plan is in motion to improve the Lorain schools to protect them from the Youngstown Plan, and dozens of public school districts have passed resolutions billing the state for money lost to charters. This doesn't include the countless legislative fires that have been put out along the way.

Did I do this? Hell no, but I like to think that I played a role, however small. I hope you feel that you have too.

This opportunity to speak at Kent had me revisit these things, and renewed my sense of purpose. The new teachers who presented their action research on a variety of topics, ranging from the use of technology to experiencing grief in the classroom, were highly motivated, intelligent, and articulate individuals who will grace our schools soon. I hope that as their careers progress, they too will have a sense that their voice can make a difference.

Thanks to everyone at Kent for the hospitality, and a special thanks to my good friend Bryan Ashkettle for making the connections.

Here's a piece from the Kent State website on the event. It accompanies the picture above.