If the Dumpster's on Fire, Put it Out. (On Solutions to the Graduation Crisis) 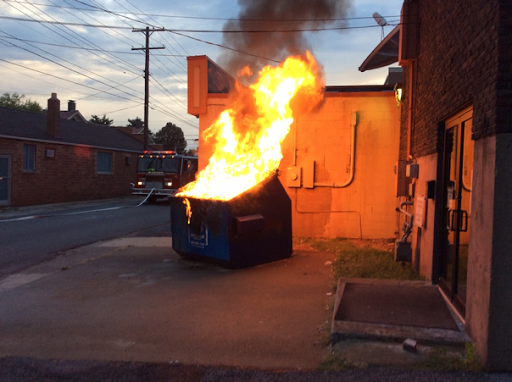 As someone who's devoted the better part of two years to promoting a solution to the graduation problem, this week was both disheartening and exciting. As in, I'm happy something is happening, even if it's not what I'd hoped. For those of us who have sat down or spoken with legislators to promote a functional safe harbor for the class of 2018, and a meaningful long term solution to a meaningless assessment system tied to graduation, the outcome of the Ohio Senate's budget proposal is unsatisfactory.
Their budget proposal was unsatisfactory for most Ohioans I imagine, if you value adequate medical care, believe in the need for treatment for opioid abuse, rely on municipal services like police and fire, or value pre-school, educational services, and after-school programs, among many other things.
As a matter of fact, as I made calls to Senators earlier this week, I found it nearly absurd that my focus was on an educational amendment to the budget bill that would have allowed students in the class of 2018 to directly replace a score on a state test with grades from the corresponding subject. In short, a kid with a 1 on the Algebra assessment, but a B in the course would earn a 4 toward graduation.
A course grade measures a balance of things like mastery of content, time management, organizational management, communication, collaboration, critical thinking, creativity, etcetera, which is why a student's GPA is a far greater indication of their ability to succeed in college or a career.
But still, why put something like this in the budget bill for goodness sake?
This is the nature of the system. The state legislature and the ODE have made such a mess of Ohio's education system that Superintendent DeMaria has convened separate committees to study the graduation requirement, assessments overall, and teacher evaluations. He's been forced to put off submission of the state's ESSA plan because of the public outcry regarding a lack of adherence to public input. The state's largest charter school has defrauded it of $60 million.
I have heard often, from legislators and citizens alike, that the budget bill is no place for laws on education (or anything not budget related). Here's the thing, I agree entirely. And if Ohio's assessment and accountability system weren't such an unholy mess, then none of this would be necessary. As it stands, the dumpster is on fire and we need to put it out.
Unfortunately, even though she is in some ways in agreement, Senator Lehner did not attempt to provide the course grade for test score protection we were promoting, but instead included the Graduation Workgroup's suggested alternative. From Wednesday's Dayton Daily News...

Senate Education Committee Chair Peggy Lehner said earning required course credits should outweigh test results, especially for this class, which has been through so much change.

“It takes several years for kids to become accustomed to a new test, and for teachers to know how to prepare students for it,” said Lehner, R-Kettering. “You’ll always see kids do worse at the beginning of new tests. … Because graduation is dependent on this, that’s pretty high stakes, so it seems only fair to give these kids in the beginning an opportunity.”

Course credits should outweigh test results, new assessments or old. So, why not swap course grades for test scores? My hypothesis is that it is simply not a politically viable option. Not enough legislators would support it. Despite it being widely accepted in education communities that GPA is a greater predictor of college success than standardized tests, policy makers still believe the tests determine college and career readiness. Despite the fact that only 13 states require the satisfaction of assessments in order to graduate, Ohio persists. Despite the fact that NAEP, ACT, and SAT scores have not improved through increasing state assessments, Ohio will test more and claim to be improving educational outcomes.
There are some legislators who seem to get it, Senator Lehner among them. I would count Senators Schiavoni and Skindell as well because they introduced a grades for scores amendment to the budget bill, the one that was not accepted. Senator Manning has also expressed her concern, and promised to be responsive to issues going forward if the Workgroup's recommendation is not enough. Even among these I'm listing, I know I disagree by degrees with each of them on the value (or lack thereof) of standardized tests. Where I see none, they may see some, but we can find common ground. The problem is that there are not enough legislators willing to listen to common sense, often cost-saving solutions from teachers, and so the dumpster burns.
Even the Grad Workgroup's recommendation is not guaranteed to survive the process. According to the Dayton article, House Rep Antani said, "There’s no reason to change the (graduation) requirements until we see how their testing went this year." This is the same thinking of former State Board President Tom Gunlock who, after being complicit in creating this abysmal system, quit his position so he didn't have to fix it, and now for some reason keeps talking as if he's still in some sort of leadership position. In their minds there is an acceptable number of students to be refused a diploma because of standardized tests, so they want to see how the tests shake out. I wonder where their threshold lies? 35,000? 30,000? 25?
Mr. Gunlock and those of his ilk also believe that a system of more confusing and convoluted tests equals high standards, and if students can't meet them, then they simply need reteaching or remediation. Because he sees it as an issue with unsatisfactory teachers, we should simply teach them again, except that the system doesn't even allow for this.
Scores from the spring tests are due to districts on June 27, 2017.
Student/Family results forms are due to districts by July 26th.
The summer testing window for retakes is July 17-28.
With all due respect to the former board President, when should we reteach an entire course for the retake? When do we remediate? Am I expected to develop time travel as well as teach the course?
Maybe you think that this is splitting hairs, and those kids can retake tests in the fall. Perhaps, but I would argue that this is only one symptom of the larger sickness within the state level education systems in Ohio. Why is no one in the ODE paying attention to these things? Why do legislators refuse to take the word of not only teachers and administrators, but parents and students as well?
We're running out of time. The 30% of next year's senior class in danger of not graduating cannot wait to make plans for their lives. We cannot come up with a solution next June and expect students to have fulfilled an expectation about which they were uninformed. That's exactly like the testing system we've ground them through. We also cannot ask districts to take on the cumbersome task of keeping track of additional pathways to graduation after the fact. As it stands, it's already going to be nearly impossible to keep track of these items if the Workgroup recommendation passes now.
The aforementioned scheduling of results release and testing amounts to a missed opportunity for each student impacted, just like the refusal to include a course grade for test score amendment in the budget bill is a missed opportunity. I do not think the Grad Workgroup's recommendation will be enough to fix the crisis for 2018, but I will support it because it's all we've got, and not to do so would be yet another missed opportunity.
And if it makes it out of Committee, I'll champion it in in the House. If by some miracle the amendment is accepted by the governor and he signs it into law, then I'll hope I'm wrong, and the recommendation is enough to get a significant amount of students to a diploma.
And then... onto the Grad Crisis of 2019, or a long term solution.
The dumpster fire rages. 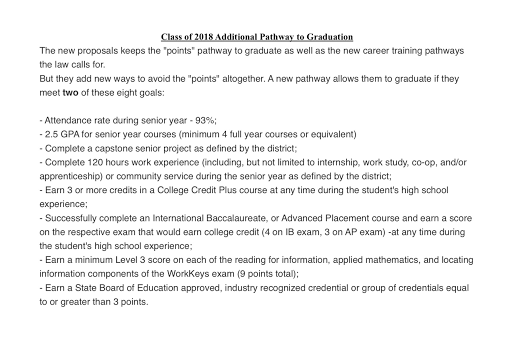 The Day Some Senators, Teachers, and a Snake Oil Salesman Met at the Statehouse. 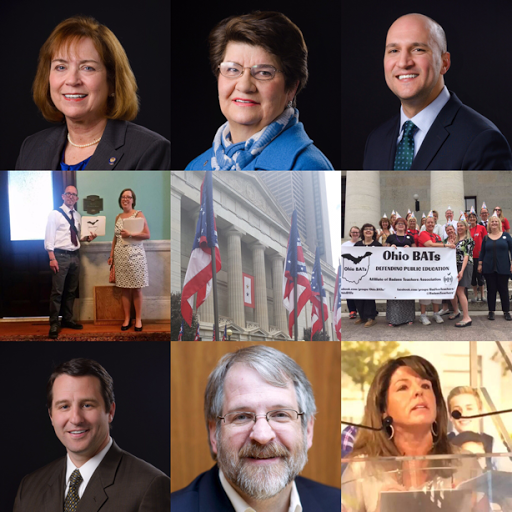